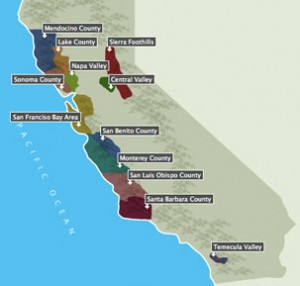 Did you know that California is responsible for almost 90% of the total wine production in the United States of America? And if it would be a separate country, California would be the world’s fourth wine producing nation after France, Italy and Spain. Chardonnay wines form an important part of California’s wine production, which are mainly produced in the seven areas described below. Especially the Chardonnays from Napa Valley and Sonoma County can compete with the best in the world! This is why I have dedicated some exclusive articles for these regions alone, links of which can be found below in their short description.

In the eighteenth century Spanish missionaries planted the first vineyards in Alta California, but the wine really took off the ground in the Napa- and Sonoma valleys in the late nineteenth century. The production suffered from

phylloxera and, from 1919, Prohibition. From the 60’s, thirty years after the cessation of alcohol prohibition, California has developed into a respected wine region. The “Judgement of Paris” in 1976 confirmed that California wines are not inferior to classic French wines. Just 30 years ago there were a few hundred acres planted in all of California; today there are tens of thousands of acres and there are more than 1,200 wineries in the state, ranging from small boutique wineries to multinationals, hence there are a lot of California Chardonnay brands. 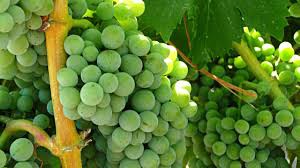 By far the most popular Californian white wine is the Chardonnay. California is known for its excellent red wine, but with Chardonnay also features a world best in white wines. California not only can compete with France in quality, but it has also surpassed the French production of Chardonnay. Thanks to the ripeness of the grapes California Chardonnay usually tastes full and is perfect for drinking with meals. 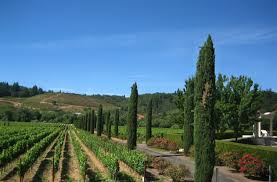 Only a few decades had Sonoma needed to develop into one of the major wine regions of California. Sonoma has a large number of smaller wine regions with specific circumstances. This explains the diversity of grapes in Sonoma County. Successful wineries like Gallo and Ravenswood use Sonoma’s cool climate as a base for leading Californian wines for Chardonnay.

Compared to wine regions like Central Valley, Sonoma and Napa County makes only a modest contribution to the

total production of California wines. Yet everyone knows Napa County, because this wine region will produce wines of exceptional quality. Example: Godfather director Francis Ford Coppola settled in the wine region with his own vineyard and its harvest is praised for his “director’s cut” Chardonnay.

It’s easy to forget that the Santa Clara Valley was California’s first premium wine production region. Native Americans named it “the Valley of the Heart’s Delight.” French and Italian immigrants who settled here during the Gold Rush era recognized the rich soils and Mediteranean climate as the perfect New World home for their European grape varietals. Although some of the vineyards were lost as a consequence of San Francisco’s expansion, this area is still popular for its wines. In the cooler parts of this area some fine Chardonnays are produced. 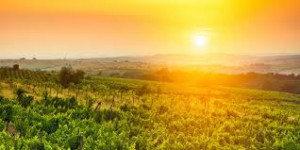 characterize, because together they certainly produce more than half of all wine from California. Many wineries also grow Chardonnay and numerous experimental varieties. The extremely sunny climate of Central Valley gives the wines a lot of colour and a strong character. I have a more detailed description of this area here. 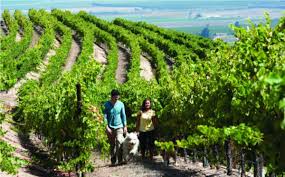 South of metropolitan San Francisco, you find the young wine region Monterey County. A reliable coastal climate and fertile soil make Monterey suitable as a wine region, particularly for the production of white wine. It has little rainfall, natural irrigation and no lack of sunshine. Thanks to the cool ocean breeze the grapes ripen more slowly than in sweltering wine regions like Central Valley and Sierra Nevada. These favourable conditions are utilized by wineries such as Bernard and Almaden to produce intense tropical flavoured Chardonnay. 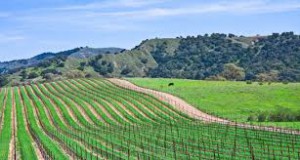 With a history of more than two hundred years Santa Barbara on the Central Coast may call itself one of the oldest wine regions of California. Like Santa Barbara Monterey lends itself best for white grape varieties. Santa Barbara wine region produces lively and fresh Chardonnay. 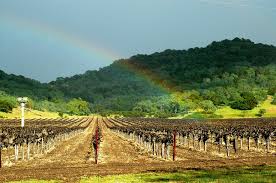 The arid rocky landscapes of the Sierra Nevada we’ve all seen in western movies. In the 19th century it was the focal point of the gold rush. These days, wine fever has Sierra Nevada in its grip. Wine regions such as Amador and Calaveras produce very creditable but less known Chardonnay wines.

Chardonnay was and is USA’s most favourite wine and most of it comes from California, Napa Valley and Sonoma County excelling.

If you are interested in these Chardonnays, please click the picture to the right (for mobile users just under this text) under the header World best Chardonnays for delivery to the USA. You will find a summary of my reviews for a number of outstanding California Chardonnays here.

Feel free to chime in with a comment and let me know which wines you prefer.