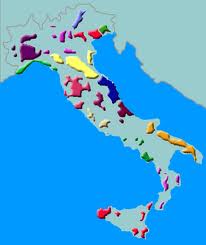 Italy is one of the oldest wine countries. It is also the largest wine producer in the world and is a regular number one wine exporter, sometimes surpassed by France. It produces some 44-50 million hectolitres of wine per year. From north to south the country has been planted with special grape varieties. Many of them come almost exclusively from Italy, such as the Nebbiolo, Sangiovese, Albana, Trebbiano, Verdicchio and Vernaccia. In viticulture, the emphasis is on the use of these native species. But the Italian wine producers are also working with well-known international varieties such as Cabernet Sauvignon, Pinot Noir, Merlot, Chardonnay and Sauvignon. This diversity and the many micro climates make Italy a special wine country with excellent and varied wines. Read more in this article on Italian wine regions.

Italy lies between the 37th and 47th latitude. Mountains dominate the landscape: the Alps in the north west and the Dolomites in the north east. At Genoa the Alps turn into in the Apennines, cutting Italy in two from north to south, the toe of the boot. If you want to go from west (along the coast of the Tyrrhenian Sea) to east (the Adriatic coast) you always have to cross the Apennines. The landscape of the two major islands of Sardinia and Sicily also is dominated by mountains.

Based on the climate and topography of seas and mountains, you can divide Italy into five zones. Each zone consists of several regions: 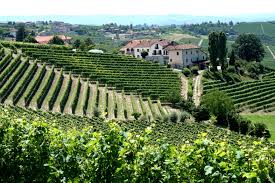 Veneto. The wine regions of these provinces are located in a valley surrounded by mountain ranges, except in the east where an opening to the Adriatic Sea is. The Dolomites and the Alps offer protection against the cold from the north; the Apennine Mountains form the southern border. Central to this area is a large plain with the river Po. From the south-east unhindered warm air currents come in. This will benefit the wine because of resulting mild winters, enough rain and sometimes subtropical heat. The wines from this area are called “vini pede montani” or wines from the foot of the mountains’. The wines coming from Piedmont especially are among the best in the world and Chardonnays are amongst them. Here some excellent oaked Chardonnays are made.

South of the river Po until the slopes of Bologna there is a large wine region that is strongly influenced by the Adriatic Sea. The wines from this area are called the “vini centrali”: wines from middle and lowlands. This area includes only the province of Emilia-Romagna. 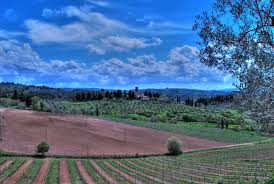 The coastline on the west side of the boot along the Mediterranean Sea forms the western zone. To the tip of the boot in Calabria, this is a large lowland area. East of this are the Apennines. Because the Mediterranean here is called the Tyrrhenian Sea, the wines from this large region are named vini Tirrenici. They come from the provinces of Liguria, Tuscany, Umbria, Lazio, Campania, Basilicata and Calabria. Especially Tuscany wines are highly regarded worldwide and here there have been Chardonnay vineyards for more than a century.

The eastern zone is a hot, dry region. Starting from Rimini the coast is, in some places only a few tens of kilometres wide, and there is little room for viticulture. The Apennines keep out a large part of the climate influences from the west. The eastern influence of the Adriatic Sea is high. Wines from this region are therefore called “vini Adriatici”. They come from the provinces of Marche, Abruzzo, Molise and Puglia (Apulia). 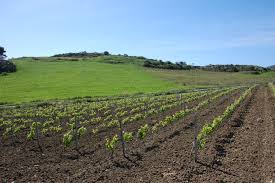 The large islands are Sicily and Sardinia. In particular, Sicily has a strong volcanic soil composition, illustrated by the presence of Mount Etna. The wines of these islands are called Mediterranean wines. They are quite powerful and very good for storage. Sicily produces some fine Chardonnays.

Italy is the biggest producer of wine and from time to time (sometimes surpassed by France) the biggest exporter, whereby most of the grapes are from native origin. Also many of the wines are blended. Yet, mostly in the northern part of the country but also in Tuscany and Sicily some fine Chardonnays are produced.

Check out some excellent Italian Chardonnays in my review here.

Do you have experience with Italian Chardonnays? Share with us which ones you like. If you have any questions, please leave a comment and I will come back to you within 24 hours.