A common complaint of inexperienced wine drinkers is that a particular wine tastes acid. But subsequently they have difficulty to explain what this “acidity” exactly means. A common complaint of experienced wine drinkers is that a wine has “strange, immature acids”. When asked, also they then cannot adequately tell you what they mean. 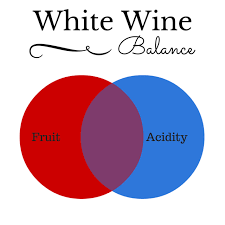 To cut straight to the point, all wine contains acids and they are a normal and natural component of wine. They are even essential for the quality of the final wine and should not be confused with sour tasting wine.

The point is that any wine, when treated incorrectly, may indeed become more acidic under the influence of heat, light and especially oxygen. In fact, wine can turn so acidic, that it tastes more like vinegar than like wine. Wine makers take care of a fine balance of sugars and acids.

So, let’s have a look at where these acids come from, why white wines are acidic (as are all reds) and what the advantages and possible disadvantages of this acidity are.

Most important acids in wine

The two most important acids that are found in wine are tartaric acid and malic acid. Both of these are formed at the time of setting of the fruit (the first start of the grape).

Wikipedia defines tartaric acid as “a white crystalline organic acid that occurs naturally in many plants, most notably in grapes. Its salt, commonly known as cream of tartar, develops naturally in the process of wine making”. 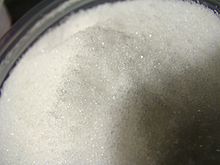 Tartaric acid can also be deposited on the bottom of the bottle. It does not dissolve and is almost tasteless so it can have a negative effect on the wine. This is typically caused by temperature fluctuations. The image depicts this acid.

Wikipedia defines malic acid as “an acid that is made by all living organisms, contributes to the pleasantly sour taste of fruits, and is used as a food additive”. Malic acid has a sharper flavour than tartaric acid, which incidentally occurs almost exclusively in grapes. The content of malic acid decreases slowly during the ripening of the grapes, but can still be considerable in the end.

Besides the two acids mentioned above there also is succinic acid, lactic acid and tiny servings of ascorbic acid, in grapes, must and wine.

Simply put, you can say that the cooler the climate in which the vine grows, the more acids are formed. The warmer 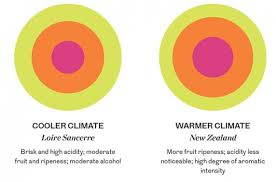 the climate, the less acids are produced. A French Chablis has a higher acidity level than a California Chardonnay.

The more heat and sun there is at the time that the grape growing, the more sugar is formed. And that is important because you will experience acids as sour at the moment there is not enough sugar. In other words, the wine lacks balance. The German Riesling white wine is a perfect example, where there often is a huge amount of acid, along with plenty of fruit sugar so that the wine does taste fresh (because of the acidity) but definitely not sour.

What are the benefits of acids?

If there is not enough acid to keep the alcohol in check, the result often is a somewhat boring, bland wine. Acids keep your wine very exciting. They stimulate your mouth, your receptors and prevent “fatigue” of your mouth. If there are no acids, chances are that you will not drink much of that particular wine.

Acids are also a preservative. To keep wine for a longer period, it needs a few things: alcohol, tannins and acids. Acids will become more elegant over time in the bottle. That is the reason that if you open a wine that is too young, 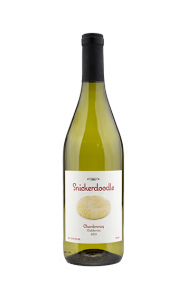 the wine will taste sour. The acids are there, but they are still not quite comfortable in the wine. Time will solve that problem.

By nature, we do not like high acidity and the well liked wines are often less acid but more sweet. Chardonnay wine owes its popularity to this fact. The Chardonnay grape gives naturally rich wines with high acidity but by harvesting late and using modern techniques, this grape is often transferred into a delicious juice.

Acids will always be a topic for discussion, one will love less acidity more than the other, but the fact remains that wine without acidity is a quite nasty drink.

What can vineyards/wineries do?

You can now imagine that wine makers have to perform a careful balancing act between acid and sugar levels in their wines. They can avail themselves of various methods to achieve optimum results.

In warm regions producers are facing too little acidity in the wines, while in the cool climates acidity is somewhat on 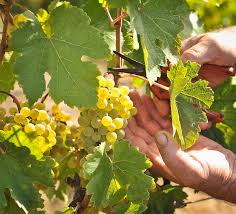 the high side for most consumers. Wine makers have to overcome these issues.

One method is to harvest the grapes a little later. After grapes are ripe, the acidity decreases while sugar levels are actually increasing. Harvesting a little later will produce grapes/wines that contain less acid and more sugars. However, part of the character of the grape will be lost, and there is a potentially higher level of alcohol. You can also let the grapes hang too long, so it will depend on the vineyard’s experience when to harvest the grapes.

Less natural methods are acidification and de-acidification. In Germany, in 2003, it was permitted to add a maximum of 4 grams of acid to the must. However, most quality producers have left it to one gram only. It is important to add the acid as early as possible, and when producers do this too late in the process, it would give poor results.

Another way is to concentrate the must by extracting water. This increases the concentration of sugar and acid. The increase in concentration strongly affects the taste of acids, the effect of which is that the wine will taste fresher. 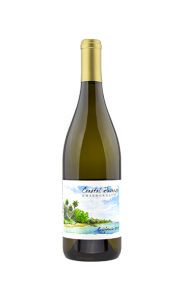 Acids form a natural and integral part of the growing, harvesting and fermenting of grapes. If someone tells you that a wine has acids, this does not necessarily mean that the wine tastes sour. The right acidity contributes to producing a fresher, tastier wine. Wine makers have to find the right balance between acid and sugar levels to come up with the best wines and they can use a variety of way to do so.

The Chardonnays presented on this site, for access please click the three images to the right (for mobile users just under this text), are of outstanding quality, having found a fine balance between freshness and sweetness. If you need further information, do not hesitate to leave a comment and I will be back to you within 24 hours.

8 thoughts on “Is White Wine Acidic?”