Chardonnay wine and wood are inextricably linked. Indeed, after the vine itself you could label the oak tree as the main tree for wines. Many wines are aged in oak barrels or get into contact with oak somewhere during its production.

But before going on let us not forget that there also is a whole range of unoaked or unwooded Chardonnays, which have been described here. 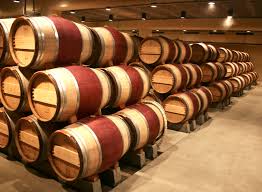 The basis for Chardonnay wines can be found in Burgundy, where some of the world’s best Chardonnays are produced. Because white Burgundy is traditionally fermented in oak barrels, this practice was also widely applied in the New World countries as well. Thus the oak ageing of wine is now performed throughout the whole world.

But how does this wood maturation place? What happens to a wine during barrel ageing? And why does one ripen some wines on wood (oak)? Please read on and I will clarify to you what is oaked Chardonnay.

The reason we began ageing wine in oak barrels was not intentional, but purely accidental. 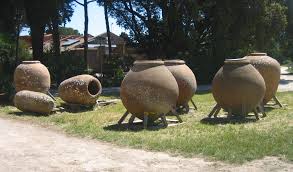 Some two thousand years ago, the Greek and later the Roman Empire had been using clay amphorae to transport wine for a long time already. As the Romans pushed north into Europe, and away from the Mediterranean, transporting the heavy clay amphorae grew increasingly difficult. When the Romans encountered the Gauls, they found a group of people who were using wooden barrels, often made of oak, to transport their beer.

The Romans quickly realized they had found a solution to their amphora issue. While other woods were used, oak became popular for a number of reasons. First, the wood was much softer and easier to bend into the traditional barrel shape than other wood, thus the oak only needed minimal toasting and a barrel could be created much faster. Second, oak was abundant in the forests of continental Europe. And finally, oak, with its tight grain, offered a waterproof storage means. The transition to wooden barrels was quick. In less than two centuries, tens of millions of amphorae were discarded.

After transporting their wines in barrels, for some time, the Romans and other societies after them, began to realize

that the oak barrels passed on new, pleasant qualities to the wine. The contact with the wood made the wine softer and smoother, and with some wines, it also made for better taste. Due to the minimal toasting (explained in the next paragraph) of the wood, wines developed additional scents such as cloves, cinnamon, allspice or vanilla, and when drunk they had additional flavours present, such as caramel, vanilla or even butter. As the practice of using oak barrels for transport continued, merchants, wine producers, and armies alike, found that the longer the wine remained inside the barrels, the more qualities from the oak would be passed on to the wine, and thus began the practice of ageing wine in oak.

If you think that you could just use any oak made barrel then think again. They need to be toasted, which is a pivotal stage in the barrel manufacturing process with customer-specified treatments applied. Staves bent over a wood fire undergo a unique process to prepare the aromatic finishing of the barrel. Along with closely monitored temperatures and fire intensities, distinctive characteristics, which can be sensed by us, are achieved. Barrels toasted in this long and gradual way, come in a variety of finishes.

What is the purpose of this you ask? It is to reach a perfect harmony between wood and wine, from light to heavy toasting and anything in between, with each level of toasting bringing its own specific tastes. I have given some examples below.

So, what happens during the barrel ageing process?

When a wine has undergone wooden maturation, this means that the wine has been stored for some time in an oak barrel. These barrels are made from oak (and not from a different species) because oak has just the right combination of a number of favourable characteristics: the wood is strong and flexible enough to make barrels, the pores in the wood allow for the right amount of oxygen to enter (not too much but certainly not too little) and oak gives the wine tastes we like very much. 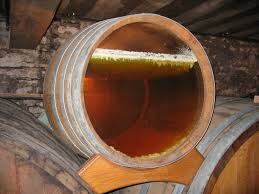 The wood gives the wine aromas from, for example, toasts, vanilla, coconut, caramel, cocoa, and / or butter. Additionally the barrels, because of a limited amount of oxygen they allow to enter, which affects the wine during the maturation. This ensures that the flavour of the wine matures and becomes more flexible. Also some tannins can develop in the wine itself during the wood maturation. The oak itself also slowly gives some tannins to the wine during ripening, so that wine can hold longer.

Wood maturation has clearly an effect on the final wine, but to what extent, depends on many factors.

For a start the length of the barrel ageing is important: it can vary from fairly short (several months) to very long (sometimes 10 years) and everything in between. The longer a wine matures in an oak barrel, the more influence it has on the ageing wine. The longer a wine is in a barrel for example, the more aromas it will adopt from the wood.

In addition, the size of the oak barrel can vary because there is no single fixed size for a wooden wine barrel. A 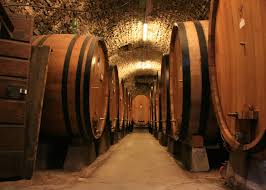 common vessel is the ‘barrique’: this is an oak barrel with a capacity of 225 litres. Barrels of 300 and 600 litres are also common. But they can be much greater: there are also wooden casks with a capacity of up to several thousand litres. In a smaller vessel, the wine has more contact with the wood than in a larger vessel, so in a smaller vessel, the influence of the oak is wood much larger than in a (very) large vessel.

The origin of the oak can also be of influence. American oak gives a somewhat emphatic vanilla flavour to the wine. French oak in contrast, has a more subtle influence.

As I explained above, the degree of toasting of the barrels will have an impact on the flavours. Light toasting: brings out fruit aromas; medium toasting: fruit aromas are now dominating; heavy toasting: spicy and grilled aromas come to the fore.

Furthermore, a new oak barrel’s influence on the taste of wine is different from a used barrel. Often,  a winemaker uses a combination of both new and used barrels. By adjusting the ratio between the two, he can regulate the influence of oak wood in the final wine.

Lastly, an oak barrel is not the only way to bring a wine in contact with the influence of oak wood. The winemaker can also choose to make use of oak wood chips or rods, which he adds to the wine during some time. The results will not be the same as with oak barrel ageing.

The initial enormous successes with oak ageing led to excessive use of wood and opulent aromas of wood, vanilla, smoke and even coconut. This backfired. Fortunately, in recent years there is an evolution away from these too rich Chardonnays. The overuse of oaking was rectified and the new oaked Chardonnays were greatly improved. Winemakers found a subtle way of ageing the wine on oak, maintaining and adding to the best flavours in the wine. 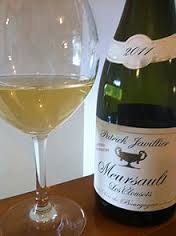 Yet the trend in many countries has resulted in white wine with a wood flavour, being immediately associated with Chardonnay. It seems as if grape and wood have become inseparable from each other.

Altogether there are so many factors play a role in any wood maturation of a wine. During the production and maturation of the wine the winemaker must make numerous choices on these factors. Choices all of whom have their own impact on the end result. But whether you like the end result or not, it is ultimately up to you as a wine drinker to determine.

I have reviewed a lot of the best Chardonnays in the world and you can find access by clicking the links to the reviews to the right of this page (for mobile users just under this text) under the heading World best Chardonnays for delivery to USA, UK or Australia.

I hope you have found this interesting and if you have any questions or remarks, please feel free to let me know through the comment box below and I will get back to you within 24 hours.

9 thoughts on “What is Oaked Chardonnay?”