Most of New Zealand wines are white.The history of wine began with the first vines Samuel Marsden in 1819 brought from Australia. The current wine industry developed from the end of the sixties. First, the emphasis was on making 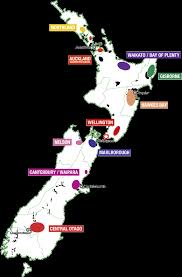 fortified wines. In the seventies, the New Zealand wine industry was guided by the advice of the German Professor Helmut Becker from Geisenheim to plant Müller-Thurgau. The New Zealand winemakers then went on to focus on the production of light, fruity white wines, where it was established that the best results could be produced in the cooler regions. During the 1990s, plantings of this internationally fashionable Chardonnay exceeded those of every other grape. Chardonnay remains planted in every region.

New Zealand has nine major wine regions where climate and terroir differ greatly. Take for example the harvest dates for the Chardonnay. On the North Island near Auckland City harvest starts in late February or early March. For Otago on the South Island it starts 6 to 7 weeks later: from mid-April. New Zealand has the so-called Wine Export Certification, ensuring that only quality wines are exported.

The following overview contains the most important New Zealand wine regions of both islands.

The bottom of Auckland largely consists of a thin layer of clay on a substrate of hard salt clay or sandy loam. Vineyards are mainly planted on flat land to the drier east coast or in western parts sheltered by hills . The most popular varieties here are Cabernet Sauvignon, Merlot, Chardonnay and Sauvignon. 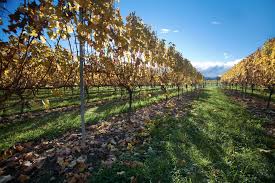 The traditional wine regions in the Auckland district are Henderson, Kumeu and Huapai. These are located north west of Auckland city centre. In the Matakana area on the east coast, north of Auckland they have made a name as a region for Cabernet Sauvignon. It is a rapidly growing area for the production of both red and white wines. Clevedon is the newest area for wines. The small vineyards of this area are on the coast, but inland.

Waikato and Bay of Plenty

Waikato and Bay of Plenty are south of Auckland. There are small vineyards and the number is increasing. They are spread across the area, surrounded by rolling farmland. Both areas have a moderately warm climate. The soil consists of heavy clay with a subsoil of clay.

Gisborne is the most eastern tip of New Zealand. The grapes here every day see the sun as the first of the world. The region has a large number of sun hours. The vineyards are mainly on flat ground and a mountain range west provides protection. The soil is quite poor and in some places of volcanic origin.

Hawke’s Bay is the second largest wine region of New Zealand. For over a hundred years grapes are grown here. The 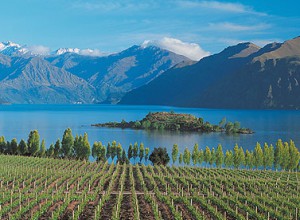 area has a varied landscape and a wide variety of soil types ranging from fertile, sandy loam to gravel. Therefore many different types of wine are made. On the hot pebble bottoms at Gimblett Road a grape can sometimes be ripe three weeks earlier than the same grape in the cooler, higher altitude vineyards of Central Hawke’s Bay.

Chardonnay is here the most widespread breed. In addition, the many hours of sunshine make the area attractive for later ripening of red grape varieties like Cabernet Sauvignon, Merlot, Cabernet Franc and Syrah and the early ripening Pinot Noir.

Wellington is not only the capital of New Zealand, but also the official name for the large southern part of the North Island. Wairarapa in the southeast is the only wine district of Wellington; the climate is very similar to that of Marlborough in the South Island. Martinborough is not only a city, but also the oldest and most famous wine region in Wairarapa. The Pinot Noir here is the most widely planted variety. This breed is also best suited to the cool conditions. The success of Martinborough Pinot Noir is largely due to the rapid development of this dynamic and quality-oriented area.

Marlborough is the most important wine-growing region of New Zealand and the only area of ​​the South Island that really counts. However, the wine growing is still young, since it was started there in 1973 only.

The growing conditions are ideal, because the loamy soils on a surface of pebbles in the valleys of the rivers Wairau and Awatere. The vineyards are not troubled by cold weather from the west and east, but a warm, northerly flow easily penetrates into the country. Abundant sunshine, cool nights and a long growing season provide a distinctive aromatic structure, which makes the wines popular. 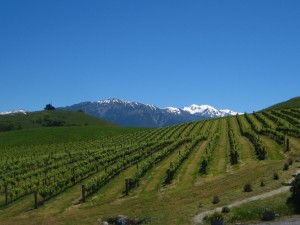 Sauvignon Blanc is the most planted grape, with Chardonnay second, followed by Pinot Noir and Riesling. Sauvignon Blanc from this area is very popular in the international wine world. Additionally Marlborough has built a good reputation with sparkling wines which are made according to the traditional method. It also has a wide variety of red and white table wines.

The other wine regions of the South Island lag behind the success of Marlborough. In many areas it is too cold, so the grapes do not ripen properly. The main varieties are Chardonnay, Sauvignon Blanc, Riesling and Pinot Noir.

Central Otago is the top wine region of New Zealand and the southernmost region of the world. This is the only area in New Zealand with a real continental climate: it has more extreme temperatures than the coastal areas. The structure of the soil differs significantly from that of other regions, and contains large amounts of mica and minerals. The Pinot Noir here is the most important race.

Although New Zealand produces some fine Merlots and Shiraz wines,  white wine growing has the upper hand, with Chardonnay taking an important role.

Elegant and fruit-driven, the classic New Zealand Chardonnay is mouth- filling, with concentrated citrus and tropical fruit. A crisp acidity balances the flavours, which are often perfectly rounded with oak.

Its versatility makes Chardonnay a perfect stepping stone for viticulturists and winemakers eager to produce a masterpiece. A range of Chardonnays are produced in New Zealand from fruit-driven, unoaked styles to concentrated Burgundy styles.

See my review of some excellent New Zealand Chardonnays here.

If you have any questions please leave a comment and I will come back to you within 24 hours. Which New Zealand Chardonnay do you like best? Kindly inform us through this site.