Chile, after Argentina, is the largest wine producer in South America.

The country has a vineyard area of about 60,000 acres. The vineyards are located between the 27th and 39th degree south latitude. The main wine regions are situated between Valparaiso and Concepción. The northernmost and southernmost vineyards are 1400 kilometres apart.

Because Chile is so long, there are huge differences in climate. The north is at 17 ° southern latitude and is mountainous and dry. The deep south extends to 56 ° southern latitude. In between is the “eternal spring”, and there are temperatures around 20 ° C. In this central area, the conditions are ideal for wine: it has a lot of sunshine (there is demonstrably more light than for example in Europe), the ocean provides the right humidity and the Andes brings enough water. Moreover, precipitation falls in favourable periods in the winter and spring.

Due to the large amount of sunlight an intensive photosynthesis can take place. At night the temperature drops significantly, so that the vine can rest. This combination creates an ideal composition of the grape and a good development of colour and aromas.

Due to the natural boundaries of mountains, ice and ocean phylloxera and other lice cannot reach the country. This makes it attractive for growers to work without chemical pesticides and organic grape growing in Chile has a great future. 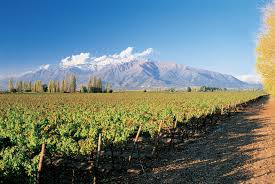 Most vineyards are located south of the capital Santiago. The names of these wine regions all end in ‘Valley’, and are often named after the main river that runs through the area in question.

They distinguish between the following parts of the country: Northern Chile, Central Valley and Southern Chile.

Chile is located in the southern hemisphere, so the northern wine regions are located closest to the equator. It is warm and dry over there. Northern Chile has two regions:

The Coquimbo Valley is the northernmost and has three wine regions. From north to south they are Elqui Valley, Limarí Valley and Choapa Valley.

Important features of this area are the heat and especially the drought. There is also a lot of light.

Of these three, Limari is the most important. It is one of the oldest wine regions of Chile. Recently they have started growing Chardonnay vines and it is expected to become the producer of wines that will be among the best in the world.

Elqui, the most northern region, is known for its fruit, including table grapes. By planting at high altitudes, up to 2000 meters, grapes are emerging, especially Cabernet Sauvignon and Syrah. Moreover, the planting of the Chardonnay grape is on the increase.

This region is mainly situated near the port city of Valparaiso, north and west of the capital Santiago. It is named after the highest peak of the Andes, which with almost 7000 meters is one of the highest in the world. There are three wine regions that are increasingly attracting attention in recent years:

Aconcagua Valley is for the most part inland and west of Valparaiso. Here we see mainly blue grapes. New vineyards, however, are mainly planted in the coastal region where it is cooler.

The Casablanca Valley is located south of Valparaiso. It’s nearly 4000 acres form the most important wine region throughout northern Chile. Especially in recent years, the vineyard area here has grown dramatically. Because of its location near the ocean, it is relatively cool. It is therefore one of the few Chilean wine regions with more white than red grapes: more than half is planted with Chardonnay.

San Antonio Valley is also on the coast, a little further south. The white grapes Sauvignon and Chardonnay are the most important ones.

This whole area is a concentration of several valleys. From north to south it is about 400 kilometres long. The vineyards that are located along the Pacific Ocean get enough rain. The vineyards in the valley between the Cordillera de la Costa and the Andes receive much less rainfall. They are irrigated with melt water from the Andes through an impressive array of channels, which partly date from the time of the Incas.

In the Central Valley there are four major wine regions: 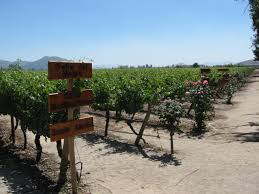 The Maipo Valley is not the biggest, but the oldest and most famous wine region of Chile. Many of the great Chilean wineries have their headquarters in this region. The vineyards are located near the capital Santiago. The bottom is generally sandy with lime. The climate is mild. The area is especially suited for the Cabernet Sauvignon, but here they also produce some fine Chardonnay.

Curico Valley has traditionally been the production area of Chile. It has a rich, fertile soil with a lot of clay. The grapes grow easily. Traditionally, it is an area for bulk wines, but today the focus has shifted to quality wines. The reds are the most important, but Chardonnays are also emerging here.

Maule Valley is the second largest wine region in the country. It lies in the south of the Central Valley, where Cabernet Sauvignon is the most important grape.

In the cooler south of the country lie the vineyards Itata Valley, Traigen Valley and Bio Bio Valley. There is sufficient rainfall, thus irrigation is not necessary. It used to be a place where mainly cheap drinkable wines were produced, but right now they invest more in quality. It is an area to keep an eye on, since they use grapes that are not used elsewhere in Chile.

Traigen Valley is the southernmost planted vineyard in Chile, where they have produced Chile’s best Chardonnays for six consecutive years.

After Miguel Torres from Spain had renewed the traditional viticulture in 1978, Chile started producing modern, fresh and fruity wines. This has resulted in a good quality image and a growing international demand for Chilean wines. If you have become interested in some of these wines and in particular in Chardonnays, please click the image of world best Chardonnays for delivery to the USA market at the right hand side (for mobile users just under this text). For specific Chilean wine review click here.

Thank you for your attention and if you have any questions, please leave a comment and I will get back to you within 24 hours.