South Africa is the eighth largest wine producer in the world and it produces 3.1 percent of the world wine production. South Africa now has about 100,000 hectares of vineyards. That’s about as much as the wine region of Bordeaux wine area or Germany. Vintners produce about 9 million hectolitres of wine per year. 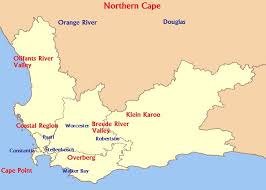 South Africa has a tradition of more than three centuries of wine making and is one of the oldest wine producing countries in the New World. Nevertheless, the international breakthrough is of a recent date. Only since 1994, with the abolition of apartheid, South Africa is really a wine country that has to be taken into account.

The South Africa wine regions have traditionally been entirely concentrated in the Cape Province. The reason is simple: in the rest of the country it is too hot. For a long time the production consisted of fortified sweet wines, port and sherry, and of base wines for distillation. One of the newer varieties of South African white wines, established during the 1980s and 90s, is Chardonnay. This ever-popular wine is one of the most widely drunk around the world, but it is only in the last two decades that it has begun to gain ground in South Africa. Nevertheless, it is one of South Africa’s best exports. Find below my summary of South-Africa wine regions.

The Western Cape has a remarkably mild climate for African surroundings, albeit with plenty of sunshine, but never scorching hot. That’s because both the Atlantic and the Indian Ocean have a cooling effect. The closer to the coast they are, the greater this effect. All areas for quality wines therefore are at a short distance from the ocean, in an arc around Cape Town.

Irrigation in the South African vineyards is not done as a rule, but a common phenomenon, cool mountain vineyards being the exception to the rule. In geological terms, the Cape is extremely varied, but not everywhere equally ideal for viticulture.

By far the most widely planted grape is still the Chenin Blanc. Other white varieties that are doing remarkably well at the Cape are the newcomers Sauvignon Blanc and Chardonnay. Muscat is there in both red and white version and is used for fortified sweet wines. Just as obvious as the planting of Chardonnay and Sauvignon Blanc for white is that of the Bordeaux varieties Cabernet Sauvignon and Merlot for red.

The Coastal Region includes the main ‘districts’ for South Africa. These districts are around Cape Town and the Cape of Good Hope, between the coastal strip in the False Bay in the south to the St. Helena Bay in the north. The Atlantic winds here provide cooling. Because it rains enough in these areas, there is little or no irrigation required.

Cape Point is a peninsula south of Cape Town. Here fine dry wines from Sauvignon Blanc and red wines in the style of Bordeaux are produced.

In the district of Darling is the ward Groenkloof. The wine region is especially known for the high quality of its Sauvignon Blanc. Sauvignon Blanc makes up the vast majority of wines from Cape Point, however, winemakers recently started producing some excellent Chardonnay wines. 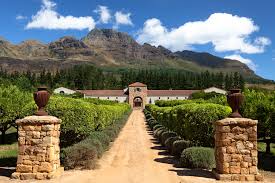 Paarl is the second largest wine region in the country. Vintners grow in Paarl many different grapes, of which Cabernet Sauvignon, Pinotage, Chardonnay, Chenin Blanc and Sauvignon Blanc have the most potential. 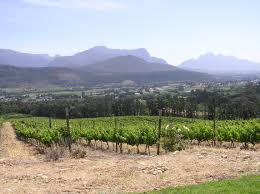 The Franschhoek Valley is located south-east of the town of Paarl and east of Stellenbosch. On both sides of the area are mountains that dominate the valley. These mountains give a quite varied climate. Franschhoek is one of the major wine regions of South Africa. The region is also associated with the production of Cap Classique sparkling wine produced mainly from Chardonnay – Pinot Noir blends.

The district Tulbagh is located north of Paarl and east of Swartland. The vineyards are surrounded on three sides by the Winterhoek Mountains. Except vineyards there are also orchards and cornfields. Chardonnay is a common planting in this area.

Swartland is a large district. It is located north-west of Paarl and Stellenbosch, along the coast. The term “black land” refers to the dark, fertile soil of this region. Swartland originally delivered robust, full-bodied red wines and fortified, port-like wines of high quality. Now the winemakers produce slight white and red wines. These wines, Chardonnays amongst them, are good and not expensive. More than a quarter of all the vineyards are planted with Chenin blanc. 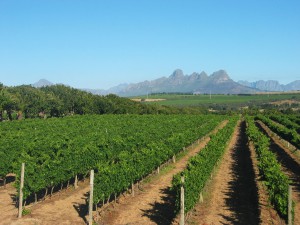 The wine regions south-east of Cape Town, close to the coast of the Indian Ocean in recent years have become increasingly important. A major reason is the coolness of the sea that has a good impact on the quality of the wine. The first planting dates back several decades ago and now Cape South Coast is a region with its own six districts. The two largest are Overberg and Walker Bay. Especially the wines made from Sauvignon Blanc, Chardonnay and Pinot Noir have quickly gained a good reputation.

Also the other districts of the southern coast are characterized by a relatively cool climate where ‘cool climate varieties’ like Sauvignon and Riesling and Chardonnay and Pinot Noir are doing well. They have an elegance that sometimes is not inferior to the comparable wines from Europe.

Robertson has long been known for its fortified dessert wines. Nowadays, they produce a few acclaimed Chardonnay and Shiraz wines.

The Worcester area is the largest wine region of South Africa. A large part of the South African wine comes from this area and the nineteen cooperatives in Worcester supply a quarter of the total wine production. It is also the largest producer of brandy in the country. A wide range of varieties are planted here; Chenin, Colombard and Sauvignon Blanc are among the most important, but Chardonnays are widely produced.

The Klein Karoo Region is an elongated region, running from east to west, from Montagu to Oudtshoorn. This region is actually a continuation of the Breede River Region. It is the smallest region of South Africa: less than 3 percent of the vineyards located here.

There is an extreme climate with hot summers and low rainfall. The vineyards are therefore especially in the river valleys, because a lot of water is available for irrigation. From this region come the most famous fortified wines of South Africa. However, the region also makes many dry wines from Chardonnay and Sauvignon Blanc.

The Olifants River Region is above Swartland. It is nearly 9 percent of the vineyards and the second smallest region. The vineyards of this region lie in the broad valley of the Olifants River. Compared to some other South African wine regions, summers are hot, and there is little rain. The composition of the soil varies from sandy soil to red, clay loams. The cool-climate areas closer to the coast are suited to the production of excellent Sauvignon Blanc/Chardonnay and Chenin Blanc, whereas the estates further inland and high in the mountains are well suited to a variety of red-wine grapes such as Cabernet Sauvignon, Pinotage and Shiraz. The wines of Olifants River have a good value for money.

South African wines are quickly becoming world-renowned. Emerging from the shadow of Apartheid, South Africa is increasingly making better wines which usually represent good value for money at all levels on the quality scale. Although South Africa is classed as a ‘new world’ region, the wines it produces are often nicely poised between the new world and old world styles. Chardonnay is increasing in popularity and is already exported widely. See my review of some excellent Chardonnays from this region here.

If you have any questions, feel free to leave them in the comment box and I will get back to you within 24 hours.