Many people are still thinking that France is the world’s wine country number one, but in reality it has been overtaken to the left and right by neighbouring countries Spain and Italy. Recently it has been noted that China, also starring in the list of wine producing countries, is an even more serious challenger to the former French hegemony, something that nobody might have dared to predict some years ago. 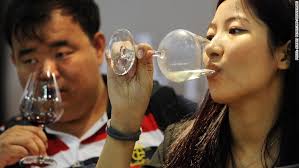 And yet that is exactly what is currently going on. China may still lag behind the real wine champions Italy, France, Spain and America, the Asian country is indeed catching up at a remarkable speed. For example, China, according to the International Organisation of Vine and Wine (OIV), planted 830.000 hectares of land with vines, which is an amazing 44,000 hectares more than France.

Regarding revenues France still remains the number one wine country. But in other areas the ranking in recent years is rapidly shifting, said Chairman Jean-Marie Aurand of the OIV. Worldwide, Italy is now the largest wine producer. In 2015 they made 49.5 million hectolitres of wine. France is still second with 47.5 million hectolitres. It is expected that China will be at that level in the near future.

So, how do they do it? Hereafter I will put you in the know of China as wine producing and drinking country, not forgetting to pay attention to Chardonnay wine in particular.

How did this come about?

For many thousands of years, China has made wine, but during the last decade – along with globalisation – much more experience was gained and developments went fast. Chinese wines have also become better, partly due to foreign expertise. Oenologists in recent years were flown in from Australia, the United States, Italy and France for the Chinese to learn the trade. Prominent French wineries like Moet Hennesy and Rothschild opened branches in the Far East. Obviously, this was because internal demand soared.

Meanwhile,  China Cabernet Sauvignon, Merlot, Chardonnay and Sauvignon Blanc grapes were growing, just like the Beimei and Yantai grape, and even an “Eye of the Dragon’ grape was gaining popularity.

The early success became evident from a study of a group of French vintners to China in 2012. Prior to going the 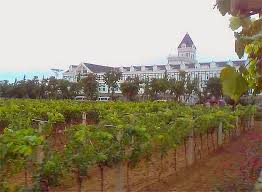 farmers expressed the wish that they hoped to discover some local wines, but they did not have much confidence in it. However, once they arrived in China, the French truly had their eyes opened wide. They discovered large Chinese wineries, such as Changyu (to the left), that had copied real French wine castles called chateaux, reconstructing them stone by stone from the French originals.

And the speed with which it happened was just as amazing. ,, The Chinese wine market increased by 55 percent in five years, ” said the French oenologist Olivier Geffroy, who also was travelling at that time. But the French were not really concerned about serious competition, as quality always went above quantity. Most Chinese wines they sampled at that time were of very poor quality. 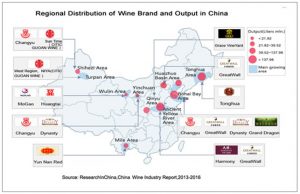 Notable wine-producing regions include Beijing, Yantai, Zhangjiakou in Hebei, Yibin in Sichuan, Tonghua in Jilin, Taiyuan in Shanxi and Ningxia. The largest producing region is Yantai-Penglai, with over 140 wineries and it produces 40% of China’s wine. So far, Ningxia is the region that’s drawn the most attention for quality wine potential, an area that might turn out to be China’s Napa Valley. Last year it began a program of enlisting winemakers from around the world to advise local wineries, even going so far as to name chateaux after them.

Most of Chinese Chardonnays come from the Yinchuan area of Ningxia where lots of Chardonnay vines have been planted. 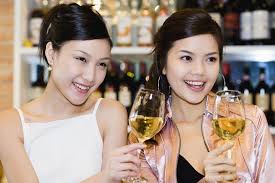 This area has quickly gained an international reputation for producing fine-tasting wines. As a result, Chinese authorities have given approval to the development of the eastern base of the Helan Mountains in Ningxia as a wine production region.

Ningxia has taken the lead recently as the premier wine-producing region in China, thanks in part to the success of wines like Dragon’s Hollow Chardonnay and the award-winning Jai Bei Lan, also available from China.

Barely three years after the visit of French vintners, everything is different. China has become a super producer and consumer of wine. And critics are positive. ,, I started tasting and was very sceptical, but all seventeen Chinese wines I tried were quite impressive, ” wrote specialist Elin McCoy last year after a tasting.

Compared to the big wine producing countries, the growth of wine consumption is by far the largest in China: 3.2 percent in a year, which is now worldwide in fifth place when it comes to the ranking of drinkers (after the US, France, Italy and Germany). When we look at the size of the vineyards, then the Chinese are already in second place, behind Spain. ,, China is the major engine of growth in the wine sector, ” said Aurand. ,, This is due to the growth of their middle class as more and more people can afford wine. But under Chinese people, there is a belief that in particular red wine is good for health. That certainly plays a big part in its growth.”

In recent years China has become the fifth wine drinking country in the world. As early as in 2013, all Chinese 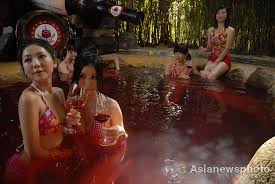 together drank and emptied more bottles of red wine than the French ever did. They even bathe in it!

White wines are also on the up and already China produces some quality Chardonnays.

It is only a matter of time, but when the level of Chinese wine will become of export quality, some French winemakers will nostalgically recall their previous wine trip to Asia when the wine drinking world was still looking up to them. Rest assured that I will keep my eyes on on-going developments in the wine sector of China and I will inform immediately you when China produces quality wines for export.

However, in the meantime, please find on this website a selection of the current world’s best Chardonnays for USA, UK and Australia markets from the best wine producing countries in the world. If you live in the USA, you only need to click the big widget to the right (for mobile phones the first one under this text) and see a summary of reviews of whites from the USA, France, Italy and more. For UK and Australia deliveries, it is the next two widgets.

If you have any questions or remarks, please leave them in the comment boxes and I will be there to help you within 24 hours.

6 thoughts on “China is catching up to France as a Wine producing and drinking Country! How about Chinese Chardonnay?”